The Auckland Marathi Association (AMAI), the city’s Marathi-speaking diaspora, celebrated Maharashtra Din, the 61st foundation day of the western Indian state of Maharashtra on May 1.

Maharashtra Din commemorates the day in 1960 when the two neighbouring states of Maharashtra and Gujarat came into being, carved out of the pre-Indian independence realm of Bombay Presidency.

On a more sombre note, the day also commemorates the martyrdom of 106 revolutionaries who had to lay their lives for the formation of Maharashtra state along with Mumbai under the Samyukt Maharashtra Movement which took place between 1956-1960.

Some 250 enthusiastic Maharashtrians congregated at the Freemans Bay Community Centre to celebrate the day with a string of excellent cultural performances followed by a Maharashtrian repast of Misal pav, jilebi and endless cups of hot chai. 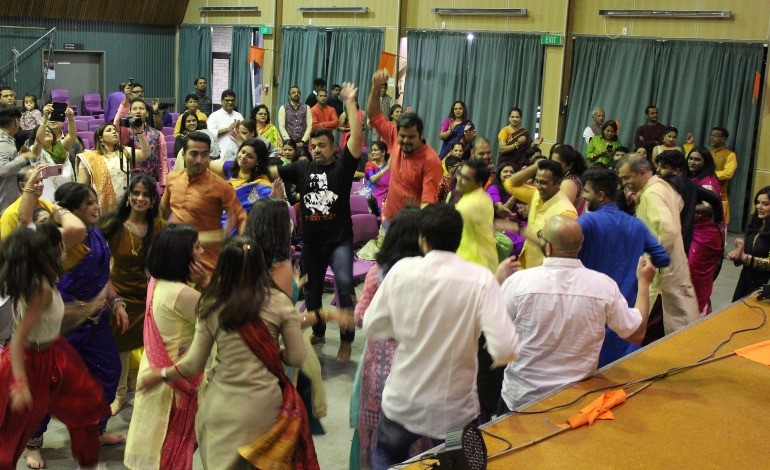 Image: An impromptu dance where everyone participated

The proceedings began by observing a two-minute silence in the memory of all those who have lost their lives in the ongoing second wave of the Covid-19 pandemic in India.

This was followed by the auspicious lighting of the ceremonial lamp by Uday Gogtay and Sandhya Gogtay, the founding members of this organisation who were also the chief guests for the evening.

The performances ranged from classical Kathak and Bharatnatyam to fusion Bollywood and folk dance, all performed by the member of all ages from tiny tots to professionally trained accomplished artistes of the Marathi community.

Stand out performances included the Kathak and Bharatnatyam dances and the exceptional dance drama choreographed and performed by the talented Swarali Pande that encapsulated poignant scenes from the timeless Mahabharat.

Winners of the Sports Day organized by AMAI in April 2021 were awarded their trophies and prizes by the chief guests.

AMAI President Vishal Patil, informed the attendees about various initiatives taken by the association like the Covid Relief Fund for India and the Ronald MacDonald Charities food serving to be taken up by the volunteers of the association in the upcoming month of June.

The evening ended with a famous Maharashtrian delicacy “Misal Paav” being served to all the people present at the celebration. Several of the attendees participated in an impromptu street dance with great gusto, having missed on the opportunity at similar events in 2020 because of the pandemic ravaged year that saw no community events because of successive lockdowns. ( Dev Nadkarni)