Manoj Kumar and Sumit Kumar from Hawke’s Bay-Wairarapa, who moved from India to dream of a Kiwi-life were named the 2021 New Zealand Share Farmers of the Year on Saturday, May 15.

Sumit Kumar, the younger of the brother-duo, spoke with the Indian Weekender and expressed gratitude for the instant recognition coming their way after winning one of the biggest awards in the dairy industry, which surely came only after years of hard work, grit and dedication at the farms.

“We are extremely happy and delighted with all the congratulatory messages we are receiving from industry experts, fellow dairy farmers, friends and family back from India and extended communities here in New Zealand,” Sumit said.

“This award is a result of teamwork and the support we have received over the years from our employers and staff, without which we could not have achieved what we have achieved today,” Sumit said.

What is NZ Dairy industry awards?

The New Zealand Dairy Industry Awards attracts farmers from across the country, working in all levels of the dairy industry, giving the entrants the chance to challenge themselves and earn a regional or national title.

This year Manoj Kumar and Sumit Kamboj, who work as 50/50 sharemilkers on two farms in Eketahuna, beat 10 other regional winners to claim the prestigious title and $50,000 in prizes.

For the uninitiated, 50/50 sharemilking is considered as the main stepping stone up the dairy industry career pathway into farm ownership since the early 1900s where dairy farmers co-owns assets, responsibilities and profit in the dairy farms.

It has been a way of learning skills and at the same time building valuable equity for a dairy farmer to make that transition from stock ownership into farm ownership.

Who are Manoj & Sumit Kamboj?

Brothers Manoj Kumar and Sumit Kamboj hail from the Indian state of Uttarakhand (Rudrapur district), where Manu finished an agricultural degree and worked for a fertiliser company for nine months. 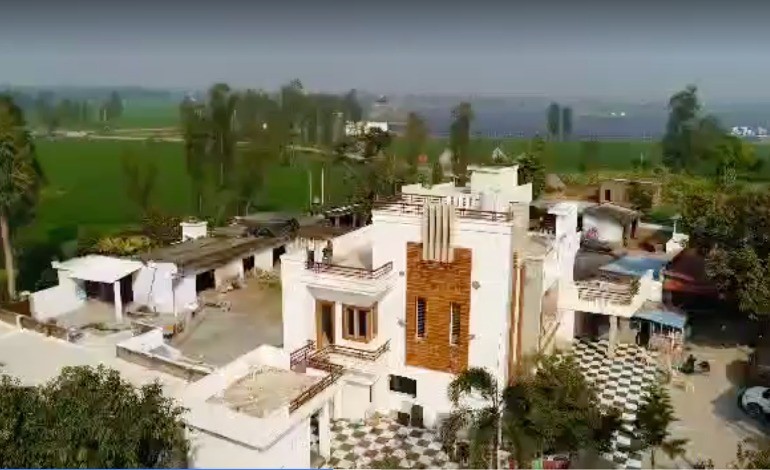 (Mirok House in Rudrapur, where the brother duo were born. They showed a video of the farms to judges)

The brothers came to New Zealand in 2010 to study with elder brother Manoj studying horticulture for nine months, while younger brother Sumit opting for a course in Business Management.

A career in dairy farming was never the initial plan or goal, and it just happened as they made some decision, took some risks, and things kept on falling in place, Sumit told the Indian Weekender.

“In India, we have a small family farm of 20 acres where we do some limited grain and dairy farming with limited technology,” Sumit said, recalling his roots in India.

“We came to New Zealand with a dream for a new life, and dairy farming was certainly not one of the dreams that moved us then,” Sumit said with a smile.

It was only here in New Zealand that the brothers developed an interest in dairy farming and the opportunities presented in the industry only after one of them had a chance job in the sector.

Sumit had followed Manoj on the farm in 2012, and since then, the brother-duo have been working diligently to own 750 cows in two different farms.

Manoj started work in Andrew and Monica Arbuthnott’s 285 cow Chessfield farm as a farm assistant and was promoted in six months as Farm manager.

It was there that he was presented with the option of becoming sharemilker – considered by many as being the muscle of New Zealand’s dairy farming industry, ensuring there is always a good supply of right talent with the right attitude and with a clear pathway to becoming farm-owners – that Manoj picked up with both hands and never looked back since then.

Together the brother duo entered into a sharemilking contract for the last four years and added another additional farm, Windhoeak with 460 cows, owned by Geoff Arends and Ester Romp two years ago, and their journey continues unabated since then.

They have previously entered into New Zealand Dairy Industry Awards before winning it big on this occasion for the simple reason that these awards were one of the pinnacle platforms for recognition of skills and talent in the dairy industry, and also the sheer participation process offered an opportunity for great learning and professional development.

What are the plans for the future?

The brothers, after having tasted success in the much famed Kiwi dairy industry, are fully committed to continuing their pursuit for further progression in the industry.

“Right now, we have around 750 cows in two different farms. Our immediate next goal is to look for a bigger farm where we can bring both the operation together,” Sumit said.

“The next mid-term goal is to buy a farm of our own and further scale up the operations.

Note, under 50/50 milk sharing contracts, the land is owned by someone else while milk sharers own cows and runs the entire day to day operations and have a revenue-sharing model.