The government of Georgia has announced that the construction of the Namakhvani hydro power plant (HPP) in the Imereti region will be suspended for 9 to 12 months until the environmental, geological and seismological surveys are reviewed and confirmed.

The government administration released a statement earlier today saying that the Turkish company Enka Renewables, which is in charge of the construction, will continue the infrastructural preparatory works only for the first stage per the valid construction permit. 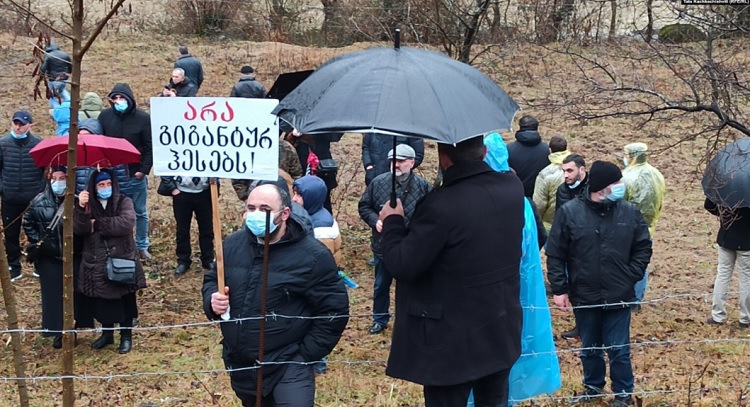 A protester holds a banner which reads: “No to Giant HPPs”. Photo: Tata Kachkachishvili/RFERL

Meanwhile, at the invitation of the government, a representative of the EU’s Energy Union will get involved in the mediation process with the non-governmental sector and study the environmental impact of Namakhvani HPP.

The government of Georgia reaffirms its readiness to continue the dialogue aimed to discuss each clause of the agreement, to make sure there are no unanswered questions remaining”, the statement reads.

Police will also remove the barriers and reduce the number of law enforcers on the ground. Although police officers will stay there to ensure the security, the protesters will be able to set up tents and rally again.

Nevertheless, local protesters plan to continue their protest against the HPP construction. Varlam Goletiani, the leader of Rioni Gorge Defender’s civic movement said a large-scale rally will be held in the Georgian capital of Tbilisi on May 23.

He told journalists in response to the government’s announcement that it seems the HPP is going to be constructed anyway, which they oppose.

The government did not have any dialogue with us. We have not told them what questions, what concerns do we have and what our red lines are… while they are independently making arrangements with other individuals, including the [justice] ministry”, Goletiani said.

This, he said, means that that the government does not consider the option that the Namakhvani HPP may not be constructed. 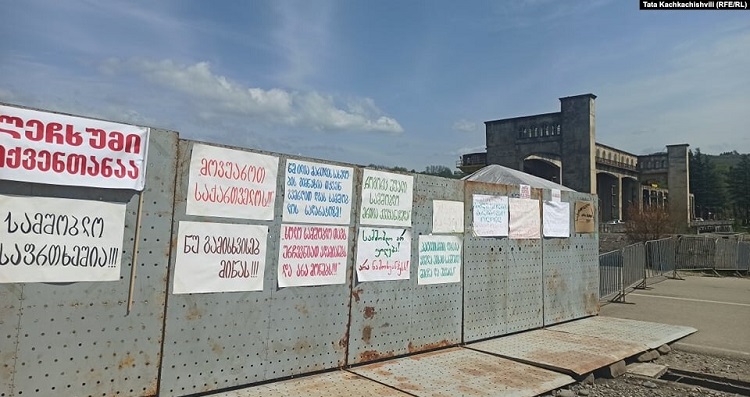 Police erected an iron wall in the village of Gumati on April 14 to hamper the demonstrators to move to the village of Namakhvani where they have been protesting the construction of the HPP. Photo: Tata Kachkachishvili/RFERL

Claiming that the HPP will cause serious environmental concerns the protesters demand from the Enka Renewables (previously known as Clean Energy Group Georgia LLC) to leave the Rioni gorge and stop the preparations for the construction.

The Namakhvani HPP Cascade Project entails the construction of two hydroelectric power plants on the Rioni river in Georgia’s Tskaltubo and Tsageri municipalities:

However, locals and activists have been patrolling the site for several months now opposing to the construction. Saying no to ‘giant’ HPPs the protesters say the construction is illegal and against the will of the local population.

Georgian Jew injured in Israel says he was attacked by Arabs with stones, bricks