The restoration of Shalva Amiranashvili Fine Arts Museum in Tbilisi will involve State Academy of Arts students, while the venue will also see artwork removed from its collections in 2010 returned to its vaults, following initiatives of the culture ministry under the recently appointed minister Thea Tsulukiani.

Hosting local reporters on Thursday, the minister presented a part of a group of paintings removed from the museum during the previous government and now sought by the culture ministry for returning them to the venue. A dozen of the works have already been located and selected for return, Tsulukiani said, with notes on others giving the ministry clues about their probable whereabouts.

Detailing known information about the art pieces, the minister said some of the works had been noted to have been removed to the ministry but could not be found there, with others located in the Czech Republic. Tsulukiani did not elaborate on details of their removal – under the then-culture minister Nikoloz Rurua – but said the foreign ministry was involved in locating the pieces now abroad.

The fate of the works became a subject of the ministry’s attention as it announced a major rehabilitation of the Fine Arts Museum last month. The initiative, aimed at resolving the poor condition of the building caused by many years of neglect, started with a detailing of exhibits and items found in the venue, leading to the moves to establish whereabouts of the missing paintings. 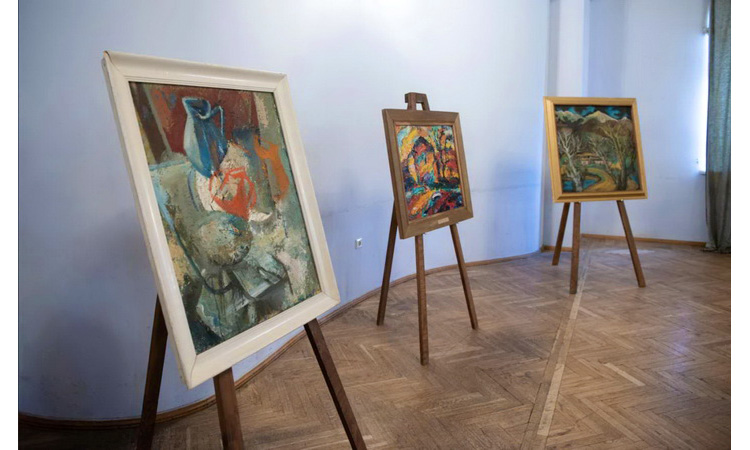 Some of the artwork located by the culture ministry for returning to the fonds of the Shalva Amiranashvili Fine Arts Museum. Photo: Tamuna Chkareuli/via Radio Free Europe/Radio Liberty.

The list of artworks features pieces by both 20th century and contemporary artists including Elene Akhvlediani, Sergo Kobuladze and Levan Lagidze, with the returned exhibits set to be re-entered into fonds of the state museum, a part of the Georgian National Museum network.

In a separate briefing on Tuesday, coinciding with International Museum Day, Tsulukiani also spoke about rehabilitation plans for the venue, announcing more than 50 students of the State Academy of Arts restoration, conservation and other faculties would take part in the effort.

Selected from master’s and bachelor’s degree courses of the institution and joining forces with a number of young professionals from outside the academy, they will work under the guidance of senior experts to detail exhibits of the museum, compare them to databases, and be involved in other work related to fonds. The work will grant them “unique experience” useful for their future work, the culture ministry said.

The rehabilitation project will see the venue – home to some of the major exhibits including early medieval religious iconography and accessories, items of historical architecture and monumental painting – receive much-needed attention 100 years after the founding of its original predecessor and seven decades after it found home in its current building in Tbilisi.

The Georgian National Museum network has said the venue faces “decades-old problems related to poor condition of its building and the inappropriate conditions of collections’ storage” and is in need of an “urgent full-scale renovation”.