The European Union Delegation to Georgia ‘warmly welcomes’ the decisions taken by Georgia’s political leaders in line with the European Council President Charles Michel’s proposal aimed to solve the political tension in Georgia.

Today, signatories from opposition parties entered parliament to participate in parliamentary business, in the name of Georgia’s citizens”, the EU Delegation said.

Together, the ruling and opposition parties elected a new Speaker and are drawing up draft legislation to address perceptions of politicized justice”, it added.

The EU Delegation stated as well that Georgian President Salome Zurabishvili has also ‘used her constitutional powers to support the implementation of this commitment’.

Noting that  ‘difficult decisions’ required ‘considerable political courage’, the EU Delegation looks forward to ‘the next steps to further implement the agreement, in line with agreed timelines, to advance Georgia’s democratic and rule of law agenda’.

It therefore calls on all other elected members of parliament ‘to join the agreement and contribute to its implementation, in the interest of Georgia, its citizens, EU-Georgia relations and Georgia’s Euro-Atlantic future’.

Opposition MPs from Lelo, Strategy Agmashenebeli, Republican Party, Girchi-More Freedom, as well as individual MPs from the United National Movement, who have signed the EU-mediated proposal, attended the parliamentary session on April 27. 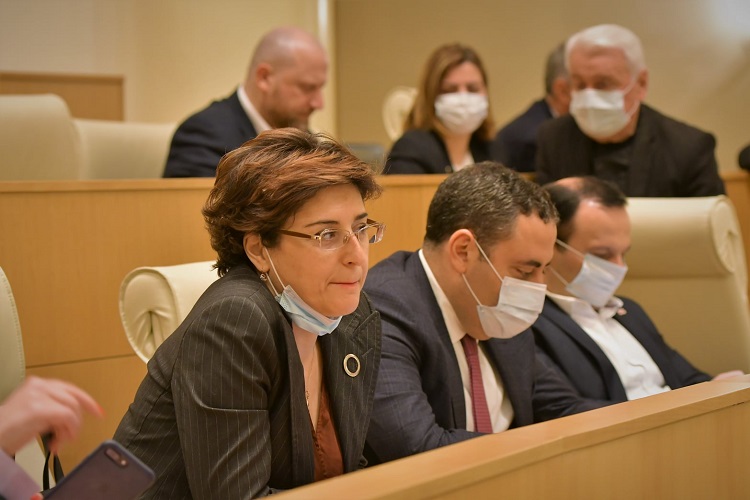 However, the United National Movement opposition party which took a majority (34 of 60) opposition seats in the 150-member parliament in the 2020 elections, as well as European Georgia and Labour Party have not signed the agreement so far and were absent at the session.