The Poti Professional State Theatre on western Georgia’s Black Sea coast will undergo a rehabilitation to resolve issues that have led to rainwater leaks and “grave condition” of the building, after Minister of Culture, Sport and Youth of Georgia Thea Tsulukiani visited venues in the west of the country on Sunday.

A plan for the rehabilitation will be drawn and verified by a national expert bureau, in a bid to avoid a repeat of the fate of the construction project of the building, launched in 2004 and completed a decade later, only for the defects to be revealed with time.

The culture ministry said “construction work of low quality” had led to “years of rainwater leaks” into the building, resulting in a “grave condition” for the venue. The theatre troupe has spent the years since evacuating it in a local folklore centre building. 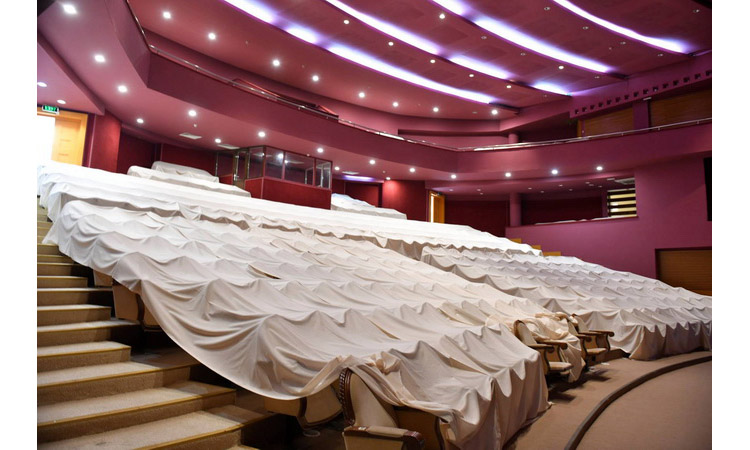 Seating in the audience hall has been under wraps since the troupe evacuated the building in the face of rainwater leaks and damage to the building. Photo via Ministry of Culture, Sport and Youth of Georgia.

In her own comments, the minister said there was a danger of walls collapsing in a “number of spots” in the building as a result of damage caused to it by natural phenomena and defective construction work.

Tsulukiani’s ministry revealed the local city hall would work with a company involved in the rehabilitation process to facilitate the drawing up of the project. The plan will then undergo inspection by experts of the National Forensics Bureau before being approved for the commencement of the work.

The Poti Theatre company has a long history since its establishment in 1882, with the troupe moving into a new venue in 1936 and the theatre named after Valerian Gunia – the Georgian actor, director, dramatist and critic – in 1963.

As part of her visit to theatres in the west of the country, Tsulukiani also paid a visit to the recently rehabilitated Senaki State Drama Theatre in Samegrelo region. The venue received a much-needed work involving renovation between 2016-2020.